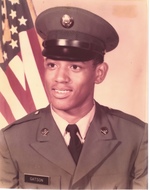 Alvin Charles Gatson was born on April 6, 1955 in Layfayette, Louisiana to Bulah Steven Gatson and Ebbie Gatson who both preceded him in death. He was the oldest of three children with his younger brother, Kenneth Gatson, Sr, preceding him in death.

He graduated from La Marque High School in La Marque, Texas in 1973. After graduation, he enlisted in the United States Army where he proudly served our country as a Medic from September 26, 1973 to September 24, 1976. He then attended Texas Southern University where he majored in Business Administration.

Alvin accepted Christ at an early age and was baptized at the Progressive Baptist Church under the pastorate of the late Rev B. W. McWashington. In his adult years, he became a member of Windsor Village United Methodist Church under the leadership of Pastor Kirby John Caldwell. He was under the watch care of Friendship West Baptist Church in Dallas, Texas where Frederick Douglas Haynes III is the pastor when God called him home.

Alvin met and married the love of his life, Viki Grant Gatson, on April 16, 1982. To this union four children were born (a son, a daughter, and twin girls).

Alvin was a sports fanatic with his favorite sport being basketball. He was fierce on the court and extended the love of sports into being passionate about his own physical fitness. You could find him at the gym working out at every opportunity. He had an entrepreneurial spirit and successfully ran his own business, JAMAL Company, for several years with the acronym JAMAL being the initials of his children that he loved so very much. He took great pride in being a grandfather and being called PawPaw. His true passion was loving and pouring into his grandchildren. Movie going, watching and going to wrestling matches, playing video games, and listening to music brought him great joy.


Graveside services for Mr. Alvin Charles Gatson are as follows:


*Mask are required*
Coleman’s Family Mortuary along with the Gatson family will require all family and friends to wear their mask and use all safety precautionary measures during the service.

All rights reserved. This obituary is also archived at obittree.com